PLEASE ALSO NOTE THAT ANY MESSAGES WITH ATTACHMENTS WILL NOT BE OPENED UNLESS I HAVE BEEN NOTIFIED ABOUT THE CONTENT BY TELEPHONE: RING or TEXT 0794 091 3288

for a preview of forthcoming games see lower down the page. For earlier reports see the News Index page 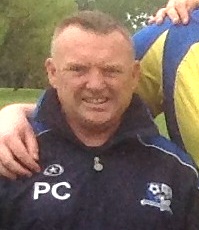 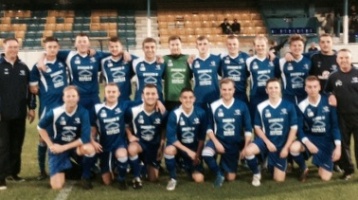 19 JAN - RIP Paul Carder - The League was saddened to hear that the former Wickersley Youth manager Paul Carder ahd passed away suddenly whilst on holiday. Paul was instrumental in bringing the side, intially known as Brinsworth Whitehill, to the League and he was their manager as they moved up the Divisions into the CBC Premier, before handing the reigns over to his son Lewis. Paul always made sure his team played football in the right manner and was a pleasure to be with. Our thoughts are with his family and friends at this difficult time. Paul is pictured far left and is on the right of his Brinsworth Whitehill team that appeared in the 2014 Steve Gee Merit Cup Final .

19 JAN - SUNDAY JUNIOR CUP - Southey bow out - Despite a strong second half and a headed goal from Todd Guest, Southey Social went out at the Sunday Junior Cup Quarter Final stage with a 2-1 defeat at Sporting Wadworth.

19 JAN - CBC PREMIER - Hobson's the choice for Handsworth, whilst top two both win out of the bottom three - Russ Hobson scored 5 as Handsworth Pub climbed to fifth with a stunning 7-5 victory over Wickersley Youth. The teams observed a minutes silence before the game in respect of former Wickersley manager Paul Carder. Hobson put Handsworth two up before Wickersley pulled one back when Drew Houghton’s run and cross was tapped in at the second attempt by Jordan Thomas, but almost straight away, Harry Johnson struck a third for Handsworth. Jonathan Claxton headed in a deflected shot for Wickersley’s second, but Matt Ellis’s deflected free kick restored Handsworth’s two-goal advantage.

Wickersley hit back again when Adam Daughtrey and Houghton combined to set up a second for Thomas, but before the break Hobson completed his hat-trick with a terrific overhead scissor kick. Ten minutes into the second half, Hobson hit his fourth when Handsworth was awarded a penalty, but a minute later, Ross Johnson’s shot could only be parried by the Handsworth keeper and Daughtrey tapped home the rebound. Wickersley got even closer when Thomas’s cross allowed Houghton to make it 6-5, but Hobson scored his fifth in a goalmouth scramble to make the points safe for Handsworth.

The top two moved further away from the rest though. Leaders Royal Earl came from a goal down to beat Oughtibridge WM 5-3. Oughtibridge went into the game missing several regulars and gave debuts to Herve Sezerano and Keian Ward, but they stunned Earl by taking the lead when Adam Thomas whipped in a great free kick that was put home by Harley Scholey. They almost doubled their lead when Callum Chambers shot was saved by the keeper, but Earl began to get into their stride and Oliver Beaumont levelled before the break. Early in the second half, a Connor Chappell penalty and a cool Richard Tootle finish put Earl in charge, but Tom Fletcher fired in a beauty to put Oughtibridge back in it. Alex Rippon (right) grabbed Earl’s fourth, but Oughtibridge hit back again through Chas Tunnard and Chambers thought he had levelled when hit shot cannoned off the bar. Rippon grabbed his second in the last minute to ease Earl’s nerves.

Second place Redmires maintained their perfect record by inflicting a second defeat of the season on Crookes 2-1. Redmires went in front with a 30 yard Jon Wall (left) free kick, but Crookes hit back before half time with a Joe Jerrison strike. After the break, Crookes had more possession, but Redmires looked more dangerous and, after hitting the woodwork four times, they finally grabbed a winner when Ben Palmer struck a contender for the goal of the season with a 35 yard half-volley.

19 JAN - DIVISION 1 - Stirrup gives Oaks a leg up - The only Division One game to beat the conditions saw Richard Stirrup (right) score a hat-trick as Norton Oaks won a thriller, 7-5 at Colley, to move up to third. Both sides had early chances, but it was Colley that took the lead with a Billy Thornley strike. Colley missed more chances and paid for it when Nasa Meah put Stirrup in for the equaliser. Oaks then took the lead with a great Matt Lennox finish, but Colley hit back to level through Jack Appleyard. Lennox and Poole combined to allow Dan Poole to put Oaks back in front and they doubled their lead before half-time when a sumptuous Scott Stringer cross was met by a Meah header over the keeper and into the far corner. Stringer increased the lead to 5-2 just after the break and although Appleyard netted his second for Colley, Stirrup scored a terrific solo goal to keep Oaks in charge. Instead of giving up, Colley hit back with a Joe Woodhouse and Ian Sharland strikes, but with Colley pressing hard for an equaliser, Oaks broke and Stirrup rounded the keeper to complete the scoring.

19 JAN - DIVISION 2 - Burke at the double for Green, whilst Wadsley s-Woon over Benji and Reds gain revenge - Michael Burke scored twice as second place Nether Green moved to within four points of the top of Division Two with a 6-4 victory in a yet another thriller at Darfield United. It was Tom Davis’s second game in charge after agreeing to take over the manager’s role for Green and Jim Pollard gave his side an early lead. After Sean Bunyan missed a penalty for Darfield, Green doubled Green’s lead through Harry Pollard and they looked to have the game sewn up by half time with two more goals from Jack Holli-Smith and Sol Limb. After a few words of ‘encouragement’ in the Darfield dressing room at half time they came out all-guns blazing and two Jordan Beardsley strikes put them back in the game. Burke netted to keep them at bay, but an Elliot Phelan strike and a third for Beardsley had Green sweating until Burke netted his second late on.

There was another high scoring game, including a Benji Woon (right) treble, as Wadsley Jack won 6-3 at Prince of Wales. Prince took the lead when Charlie Hawkins’ cross saw Dan Neilson rise like a salmon to head home and they doubled their lead before half-time when Matt Waterhouse met keeper Ben Raynes’ clearance to hit a left foot shot past the Wadsley keeper. The second half belonged to Wadsley, with Woon’s hat-trick together with George Scott, Reece James and Ethan Wilkinson strikes winning it for them despite Tom Furniss briefly levelling things for Prince.

Mosborough Reds gained revenge for the previous week's defeat by Beighton Magpies by beating them 2-0. It took just four minutes for Luke Newman to head home from a terrific Alix Sorsby cross and Oliver Tupling hit a brilliant free kick to double the lead in the tenth minute. After that the Mosborough defence stood firm and their first clean sheet of the season meant they went home with the points.

13 DEC - LEAGUE TWENTYTWO CUP - Quarter Final draw - Sheffield United's Club Historian and Supporter Liaison John Garrett and his wife Sarah helped make the draw for the League Twentytwo Cup and it saw the last remaining Division Two side Eckington BFC drawn against CBC Premier Wickersley Youth. Division One Chapeltown RBL have a tough task against semi-finalists for the last two seasons, Crookes. The only certain all-CBC Premier tie sees Redmires paired with Norton Sportsman, but there could be another as Royal Earl will face Stannington Village if they both come through their delayed ties. The full draw is: Crookes FC v Chapeltown RBL; Redmires v Norton Sportsman; Stannington Village or Southey Social v Boynton Sports or Royal Earl; Wickersley Youth OV v Eckington BFC. The two delayed ties and three Quarter Final ties will be scheduled for 12 January, providing there are no complications with County FA Sunday Cup ties.